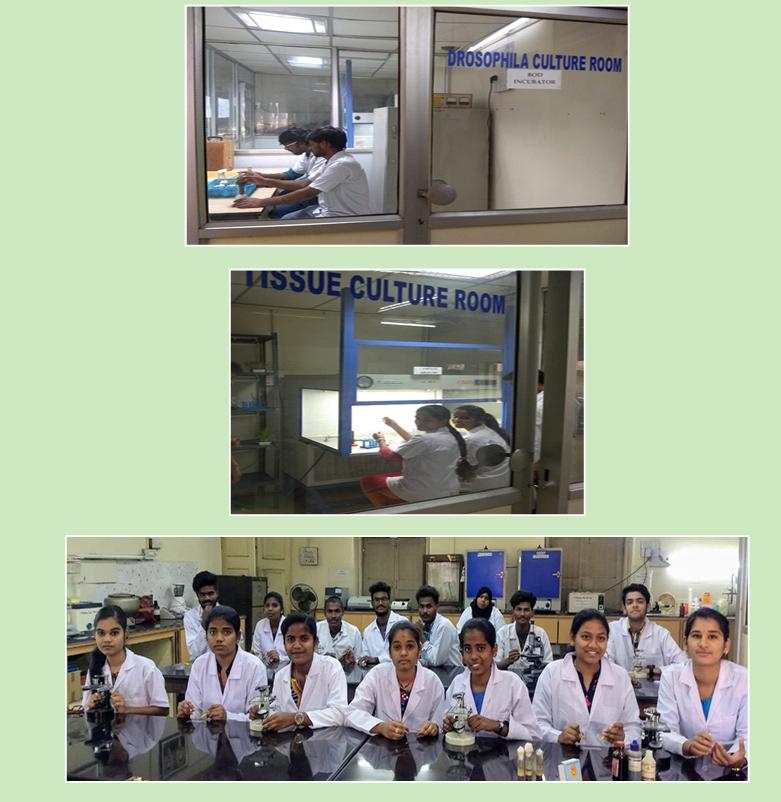 The Department offers Genetics as an optional for the B.Sc. Degree course. The course was started in 1979 with an intake of 30 students and the combinations were Genetics, Botany & Chemistry and Genetics, Zoology & Chemistry. Subsequently, the course was offered along with Biophysics and Chemistry besides the above combinations. Presently the combination offered is Microbiology, Genetics & Chemistry. The Department is also anchoring a self-financing course in Biotechnology, which is one of the optional subjects at the UG level; the profile of the course is documented separately. The genetics curriculum is offered in the semester pattern from 1990 onwards, spread over three years with two semesters per year. The papers include: General Genetics 1 & 2; Genetics of Microorganisms, Molecular Genetics, Applied Genetics (Quantitative Genetics & Breeding Principles in Plants & Animals), Applied Genetics 2 (Human Genetics & Immuno Genetics), Biometry & Populations Genetics, Evolutionary Genetics , Eugenics and Genetic Engineering.

The department has received UGC-BSRG grant in 2007-08, which was utilized for the strengthening of lab facilities .The department has also received financial assistance from DBT during 2009-10 under Star Status Scheme. The department has established a well sophisticated lab with the major grants from UGC-BSRG, DBT, allocated funds from CPE-XI plan, and annual Autonomy grant etc.

The student's performance has been highly satisfactory with over 70% getting first division. Majority of them are securing placements in PG programs and have pursued/are pursuing courses in central institutes like IISC, NCL, JNU, Madurai Kamaraj Univ., BHU, Pondicherry Central University, HCU and state Universities like Osmania, Kakatiya, Nagarjuna & Andhra Universities. Two of the student's- Jayanthi & Mahipal topped the Life Sciences entrance exams at HCU in the past. Mr. K.Subash was one among the 8 selected on an all India Basis for an integrated Ph.D. program at IISC. Shashidhar preceded him earlier. On an average one or two candidates are getting admitted to Masters/Doctoral programs at USA, UK and other countries following their graduation followed by one year study elsewhere. Campus placements have given scope for direct recruitments to some of our students. Students have participated in events like Bio-conference organised by Bio-Vision, Genome Valley, Govt., of AP. Students have participated in summer projects, notable among them is the work carried out by one our student at Rajiv Gandhi Biotechnology Center, Thiruvananthapuram and short term projects at CCMB and other private Institutions. .